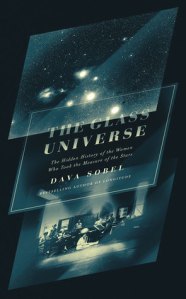 The Glass Universe: How The Ladies Of Harvard Observatory Took The Measures Of The Stars

I received a free copy of The Glass Universe from the publisher in exchange for my honest opinion.

#1 New York Times bestselling author Dava Sobel returns with the captivating, little-known true story of a group of women whose remarkable contributions to the burgeoning field of astronomy forever changed our understanding of the stars and our place in the universe

In the mid-nineteenth century, the Harvard College Observatory began employing women as calculators, or “human computers,” to interpret the observations made via telescope by their male counterparts each night. At the outset this group included the wives, sisters, and daughters of the resident astronomers, but by the 1880s the female corps included graduates of the new women’s colleges—Vassar, Wellesley, and Smith. As photography transformed the practice of astronomy, the ladies turned to studying the stars captured nightly on glass photographic plates. The “glass universe” of half a million plates that Harvard amassed in this period—thanks in part to the early financial support of another woman, Mrs. Anna Draper, whose late husband pioneered the technique of stellar photography—enabled the women to make extraordinary discoveries that attracted worldwide acclaim. They helped discern what stars were made of, divided the stars into meaningful categories for further research, and found a way to measure distances across space by starlight. Their ranks included Williamina Fleming, a Scottish woman originally hired as a maid who went on to identify ten novae and more than three hundred variable stars, Annie Jump Cannon, who designed a stellar classification system that was adopted by astronomers the world over and is still in use, and Dr. Cecilia Helena Payne-Gaposchkin, who in 1956 became the first ever woman professor of astronomy at Harvard—and Harvard’s first female department chair. Elegantly written and enriched by excerpts from letters, diaries, and memoirs, The Glass Universe is the hidden history of a group of remarkable women who, through their hard work and groundbreaking discoveries, disproved the commonly held belief that the gentler sex had little to contribute to human knowledge.

The Glass Universe explains, in great detail, how women in astronomy helped create our current understanding of the stars, galaxies and the universes.

The Glass Universe covers astronomy from the 1870’s all the way to present day, so Sobel covers a vast time period which showed the advancement of technology and how it only in the last 30 odd years that it was able to benefit astronomy.

With The Glass Universe covering a humongous time period, Sobel managed to cover almost everything in detail. The main focus, however, was on the beginning period of how Mrs. Anna Draper and her fellow ‘human computers’ laid the foundation for future female astronomers.

My favourite part of The Glass Universe was probably finding out how a lot of astronomers were enlisted during the second world war as their skills in astronomy translated well into calculating trajectories, recognising patterns and variations and such-like. Whilst I can see how easily the skills can translate, I just never thought that they ever would. Also, the effect of WW2 on not only astronomy but all sciences was vast and when before the sharing of information was second nature, it suddenly became non-existent until well after the war had finished.

I personally found The Glass Universe quite a struggle to get through, it took me about 7 months of reading it on-and-off. I am not saying that it is a bad book, I quite enjoyed it, but with so much information to take in, and it not being particularly stimulating to read if you are not dedicated to reading this it would be very easy to put down.

If you really enjoy astronomy and want to find out how far along research astronomy has come along, or if you are just generally interested in history then The Glass Universe is perfect for you.

Have you read The Glass Universe? Do you agree with my review? Let me know your opinion in the comments below!

One thought on “The Glass Universe Review”