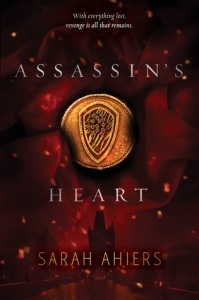 I received a free copy of Assassin’s Heart in exchange for my honest opinion.

Considering that I have a strange fascination with books about assassin’s, I would only accept the best around this subject. For a Young Adult’s book, it better than most but it does suffer from the predictability that most YA books seem to be suffering nowadays.

I found certain characters very frustrating and at times contradicting what they had previously said / done. Yes, I understand that what they did progressed the story forwards but for the characters continuity I found this incredibly frustrating. If this only happened to one or two characters then I might have let Ahiers get away with it, but this occurred with every character.

The locations very amazing. Each city was a character of its own. Seeing how they react to events and changed the assassins playground was amusing.

I found the added layer of ‘ghosts’ made what would have been an boringly predictable book like nothing I have read before. Instead of just worrying about assassin’s, these ghosts added a mystical element that took Assassin’s Heart places I did not expect.

I would defiantly recommend Assassin’s Heart to most people.

Have you read Assassin’s Heart? Do you agree with my review? Let me know your opinion in the comments below!

One thought on “Assassin’s Heart Review”