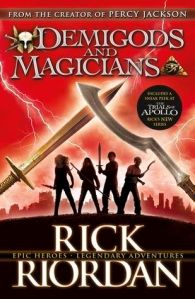 Demigods And Magicians collects the three crossover novella between the Percy Jackson series and the Kane Chronicles.

Since these three novellas are so different I shall review them individually and then give my overall thoughts on this bind-up.

The Son Of Sobek

Carter Kane and Percy Jackson meet up in this first crossover novella. Being only 40 pages long, not as much detail goes into this as it probably should have but it had enough that it was worth while reading. The Son Of Sobek was written in the perspective of Cater Kane, and boy was it interesting to see how he described Percy for the first time.

All that The Son Of Sobek has really done, for me at least, is that it has opened up the world to more of these mythology crossovers and I cannot wait to see how Riordan is going to explain the different sets of gods and goddesses coexisting.

The Staff Of Serapis

Told from Annabeth’s perspective, The Staff Of Serapis is the second of the Egyptian Gods and Greek Gods novella crossovers. I must say that it was quite funny having Anabeth describe Sadie Kane. The main purpose of The Staff Of Serapis was to set up the the final novella in this bind-up, The Crown Of Ptolemy.

The Crown Of Ptolemy

The Crown Of Ptolemy is the third (and I assume final) Percy Jackson and Kane Chronicles crossover novella. Both The Son Of Sobek and The Staff Of Serapis set up this novella perfectly. It was very interesting to see the combination of Greek and Egyptian and how they flow fro the same source. I do feel like The Crown Of Ptolemy was almost rushed. Since it is only meant to be a novella, Riordan was unable to expand like he normally does and give both the character and the atmosphere some depth. Apart from feeling like it could have benefited from 20 – 30 more pages, The Crown Of Ptolemy leaves with the possibility of future crossovers which I cannot wait to see if they end up happening.

This novella bind-up was an interesting one. I love how the Greek and Egyptian gods and goddesses are able to co-exist and what this may mean for future books that Riordan is going to write. I do feel like they could, and should, have been longer to allow the situations that they were facing to sink in better and just generally give him some more workability with the storyline.

Have you read Demigods And Magicians? Do you agree with my review? Let me know your opinion in the comments below!