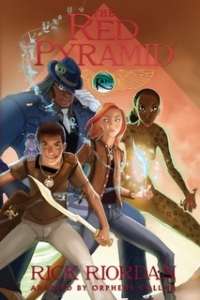 This is the graphic novel adaptation of The Red Pyramid by Rick Riordan.

Set around Egyptian mythology, this graphic novel is a very accurate adaptation of the original novel.

The art style was better than not, with the actual adaptation of the novel not being the clearest at times (the novel is written as an audiobook. Read the novel, you will understand what I mean). Once I had figured out how they adapted the mixed narration style of Sadie and Carter Kane, The Red Pyramid was visually how I imagined the novel. The characters facial expressions were spot on, as well as hinting to things that had to be explained in the novel with just a look in this graphic novel adaptation.

The lettering (the boxes and speech bubbles in case you were wondering) could and probably should have been done clearer. Like I said earlier, both Carter and Sadie were narrating the story and constantly interrupting each other in the novel and it was not obvious to me that they had changed who was narrating. I could imagine someone who had not read the novel getting completely confused about this.

I would recommend that you read the novel before you read this graphic novel so that you do not get confused with the events of the story.

Have you read The Red Pyramid Graphic Novel? Do you agree with my review? Let me know your opinion in the comments below!