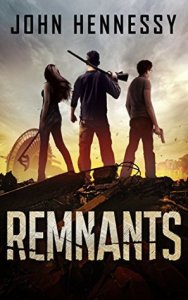 I have teamed up with John Hennessy, the author of Remnants, and I have 5 ecopies of Remnants to give away to you!

Entries close on May 12th NZST

Night one brings marked doors to every home in the world. Day one sees confusion and fear. Night two takes half the planet’s population. Day two leaves panic and mayhem. Night three watches the second half disappear. Day three the fight for survival begins.

The world ended in silence. No birds chirping. Dogs barking. Cars thrumming. No people going about their busy lives. After the aliens arrive, they clear the globe of every living animal, except for a few scattered bands of human survivors. Now Maggy, a strong-willed intellectual, leads Darrel and Félix, two shy geeks, on an expedition down the west coast, searching for safety in a landscape that promises only a gruesome death, as the aliens hunt down the remnants for sport. But when one of them is abducted, a much more sinister truth unfolds, one that will change the course of humanity forever.

Remnants is perfect for fans of The 5th Wave, alien invasions, the apocalypse, and just pure sci-fi adventure.

Note: For verisimilitude of teenagers facing the apocalypse, this book contains strong language, and is intended for mature young adults. If such words offend you, you might not enjoy this book.