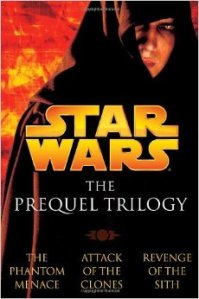 Star Wars: The Prequel Trilogy was a lot better than I thought it would be. Obviously, it had the 3 books for the episodes I -III, but surprisingly gave a lot of back story that may have helped the movies. Each book is written by a different author, each whom gave an interesting on their interpretation on novelising the movie.

Episode I: The Phantom Menace – 4 Stars

The Episode I novelisation was defiantly a lot better than the movie, Brooks somehow made Jar Jar Bink’s existence bearable, which is a minor miracle. I honestly don’t have much to say about Episode I, the writing style was good, the fight sequences were well written, and it gave quite a good background around all the characters, which I really enjoyed reading about. But at least Brooks made Jar Jar bearable, and dare I say it, almost interesting to read about.

Episode II: The Attack of the Clones – 4 Stars

Episode II kind of disappointed me. I know that Episode II was almost a ‘filler movie’, and its main purpose was to set up Anakin’s fall to the Dark side and The Clone Wars, but I had higher hopes for the book. I still really enjoyed it but I found that I was almost too short for the movie to give a full and detailed background to the movie. This novelisation was very close to the movie, and gave some very good expansion on how each of the characters interacted to each other, and how they was each other which is very hard to do in a movie.

My favourite characters were Jango and Boba Fett surprisingly, their relationship was a very interesting one that I would have to have seen more of as Boba was an exact clone of his father, so it was possible that he saw what he was going to become and may or may not have liked that. Either way, at least this novelisation gave a reasonably good back story, but I would have liked it to be expanded on a tad more.

Episode III: The Revenge of the Sith – 5 Stars

Episode III gives the reader a greater understanding of Anakin’s fall to the dark side. The fight sequences weren’t as good as the movie, but that is too e expected with the amount of stuff happening within them. Mainly the fight between Anakin and Obi Wan on Mustafar was over before I realised it was, which was disappointing. The ending was like Stover wanted to finish writing the book, which unfortunately left a bad impression on myself, but I still loved his writing style, I have never seen it before. Episode III gave so much insight into how to characters thought, which can be difficult within a movie.
The scenes between Anakin and Padme were really cute, ‘”No worries. You worry too much as it is.” “I have to,” she said, smiling though tears in her eyes. “Because you never worry at all.”’, they made me fall in love with them even more which I did not think was possible as I was brought up on Star Wars.
It was interesting how Stover interpreted when the newly turned Sith Anakin Skywalker / Darth Vader went to Mustafar to end the war by killing the Separatist leaders.

“He had time to gasp, ‘You’re – you’re Anakin Skywalker!” before a fountain of blue-white plasma burned into his chest, curving though a loop that charred all three of his hearts. The Separatist leaders watched in horror as the corpse of the head of the InterGalatic Banking Clan collapsed like a depowered protocol droid. “The resemblance,” Darth Vader said, “is deceptive.”
I swear that line made the book, it gave Anakin / Vader so much more depth, and very nicely illustrates how he has given himself over to the Dark Side of the Force.

I quite enjoyed these collection of books. They added so much depth to the movie that some may argue George Lucas may had needed in the prequels. I would totally recommend these books to anyone who likes Star Wars and wants to have a deeper understanding of the characters thought throughout the movies.

Have you read Star Wars: The Prequel Trilogy? Do you agree with my review? Let me know your opinion in the comments below!